What grade would this visual essay be PLS HELP? - An Education 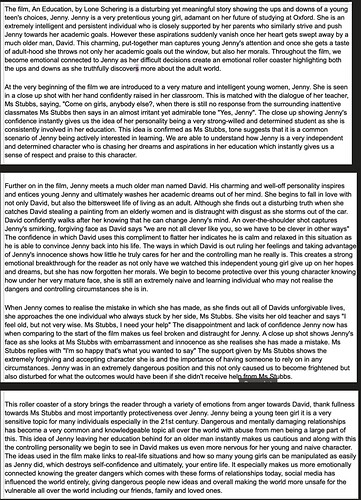 Kiā ora
Could you try and copy it in rather than a screen shot? It is really hard to read.
Cheers
JD

In the film An Education, directed by Lone Schering, capturing a disturbing yet meaningful story highlighting both the ups and downs of a young teen’s choices. It is a touching tale of the very driven and pretentious young girl, Jenny and her experiences growing up. Jenny is acing her studies and adamant for the acceptance into Oxford until her attitude to school changes entirely as she gets drawn away by romance. Despite her sheltered upbringing whose parents strongly strive for the similar academic vision, she finds herself convinced into a much different life with a man much older, David. David’ charming and mature character interests young Jenny and after getting a taste of the adult life her aspirations of the future suddenly change. This rollercoaster of Jenny’s teen girl life allows us to see the significant change as a person Jenny has when comparing the start and end of the film.

When we are first introduced to Jenny at the beginning of the film, Jenny I seen in her classroom filled with other students at what looks to be a very well off school. She is an eager student constantly engaging in the class and raising her hand at almost every opportunity she gets. A close up shot of Jenny is shown with her hand raised while behind her fellow students are seen as much less attentive and engaged. In this shot the teacher, Ms Stubbs says “Come on girls. Anybody else?”, and after no reply says “Yes Jenny”. This almost irritated tone in which the teacher speaks in shows that even her teacher is aware of the extraordinary smarts in which Jenny has. The contrast too the other students highlights the eagerness and devotion she has to her learning and studies. This instantly sets our impression of Jenny and her morals as a very academic driven teen which is ironic as the immense change later I the film proves otherwise.

After Jenny meets David her passionate attitude and love towards school begins to change, although the most noticeable change to Jenny’s personality occurs slightly later. When David unexpectedly returns from a house viewing with a stolen piece of artwork, Jenny is not only astonished but also disgusted with his theft which comes close to changing how she views him entirely. Jenny abruptly storms out of the car sticking to her morals and realising how wrong David’s actions were. Despite her reaction, David walks over in a relaxed yet firm matter and an over the shoulder shot captures Jenny as she is swayed back by David who convinces her of his ‘harmless’ act. This shot shows Jenny as she smirks, giving into his flirtatious sense of humour and forgiving him. This is seen as a huge changing point in Jenny’s character because not only has she lost her previous determination towards study, she has now also lost her morals. It was clear Jenny was upset and against what David had done, yet she gives in as David flatters naive Jenny once again into his trap.

Once Jenny realises her romantic fantasy was built on lies, in desperation she visits her old teacher, Ms Stubbs, in hopes of some help. She was the only person she knew capable to rely on in assistance to get back on track. In a close up we can see Jenny’s, innocent and desperate face as she turns around and says “I feel old, but not very wise……Miss Stubbs I need your help” the camera then switches to a close up of Ms Stubbs turning around in an emotional wave of relief in which she then says " I’m so happy that’s what you want to say" These camera shots show Jenny as a lot less confident and bold individual as she shyly confesses the fact that for once she had not been right. By the expressions seen on Ms Stubbs face we can see the relief wash over her as she had always believed in Jenny’s gift and her gracious and forgiving character willing to yet again support her student. This is a huge turning point in Jenny’s character as she shows that she is now aware she may not be as mature and wise as she once perceived herself to be. Even though Jenny is academically smart, she realises that this is far different to the smarts that come with maturity and age.

Jenny’s experiences throughout the film mould her into an almost entirely new person. She is first seen as an egocentric individual who is very in line with her academic life and aspirations of an Oxford attending future. But once she gets the taste of what she thinks is the bittersweet life, she suddenly stops thinking like she used too and throws away everything, including her own morals. Just as she think she has won at life, she realises she got everything wrong and finally can see the bigger picture just as Ms Stubbs was trying to tell her, that as a young girl, she is not as wise as she thinks. This highlights the idea that maturity can come from education, yet majority comes from real life experiences. Jenny thought she was intelligent enough to know just as much as adults but soon realises how far from the truth this was. By gaining experience through time as well as knowledge it enables you to not only grow academically but also teaches us about ourselves and the world around us which is what truly makes one wise.

Kiā ora
Thanks, it is much better to read.
The first paragraph needs to address the question in both parts - who is the significant character, why is she significant ( maybe because she shows the theme)how she changes and what language features allow us to experience the change. You do not mention the features, see if you can bring them in.
Better in the next paragraphs - some good evidence and analysis.
A little more comment on the purpose - to let us better understand the way experiences change who we are perhaps in the conclusion maybe. But a really solid essay.
Cheers
JD